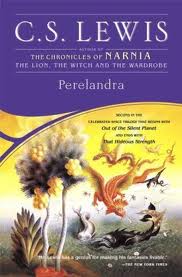 In the second installment of Lewis’s space trilogy, Dr. Ransom travels to Perelandra, also known as Venus. Ransom describes this other world as a strange collection of floating islands. In a constant state of flux, these islands continuously undulate with the massive swells of the ocean surrounding them.

While there, Ransom finds the animal life to be friendly as he roams across the islands and enjoys the natural vegetation for sustenance. Even the ocean water is sweet to taste.

There are many parallels between Perelandra and the biblical Garden of Eden. For instance, only one human-like couple lives in this paradise. They are the King and Queen who will someday populate the planet with their children and children’s children.

Like the forbidden fruit in Eden, the King and Queen are also forbidden by their God, Maleldil, to sleep on the one mountain called Fixed Land, which is the only known land that doesn’t float. When the King and Queen later become separated, a tempter comes to convince the Queen of her need to disobey Maleldil. This tempter is none other than Ransom’s earlier antagonist Professor Weston.

Ransom finds himself in the unique position of needing to intervene. Yet, the thought of doing so renders him apprehensive – lamenting a deep sense of inadequacy for this task. He remarks:

“One can never see, or not till long afterwards, why any one was selected for any job. And when one does, it is usually some reason that leaves no room for vanity. Certainly, it is never for what the man himself would have regarded as his chief qualifications.” (22)

Ransom also worries that he will not physically survive his opposition to Weston. However, the Voice of Maleldil reminds him that, “It is not for nothing that you are named Ransom” (125). With this in mind, Ransom purposes to save the innocence of the Queen, and the future of Perelandra, by rebuffing Weston’s persuasive arguments.

Much of the book entails the verbal and physical struggle between Ransom and the Evil One who resides inside of Weston. And all along, there is “no faintest guarantee” of a victorious outcome (125).

The greatest point of contention occurs when the Queen tries to reconcile the disparity between the fact that humans are allowed to sleep on the fixed land of earth, but on Perelandra, they are forbidden. Weston does much to exploit this unfairness in his favor; thus, Ransom, at first, is at a loss for any kind of sound explanation. But then he rallies back by saying:

“I think He made one law of that kind in order that there might be obedience. In all these other matters what you call obeying Him is but doing what seems good in your own eyes also . . . [But how else] can you taste the joy of obeying unless He bids you do something for which His bidding is the only reason?” (101)

In the end, Perelandra is saved, and Ransom makes it safely home to earth.

Like the first novel, Out of the Silent Planet, there numerous themes in this sequel by which I could devote countless essays exploring. Yet, the one theme that is most consistent, and most evident, is the pairing of a God-given assignment to an ill-equipped person.

At different times, we too may feel uncertain about a particular path before us, yet we can trust that God will not ask anything of us without also granting the grace necessary to sustain us.

Have you ever read Perelandra?
What was your response?
Have you ever felt called to a task you felt unprepared for?
For May 1, 2011, we’ll finish the trilogy by reading “That Hideous Strength.”

5 thoughts on “Perelandra – The Book Club”